Skip to Content Jump to Main Navigation Skip to Search

You Are Here: Phase analysis and structure refinement

X-ray diffraction can be generalised as the diffraction of plane waves at periodic patterns. A similar description can be used for the diffraction of electrons, neutrons, and atoms. An incident wave excites matter at all locations in the crystal to emit Huygens spherical waves of different phase and amplitude. These interfere and reach the place of observation. In periodic patterns, constructive interference between two generated spherical waves of the same wavelength occurs, if the path difference between them corresponds to an integral multiple of the wavelength. This requirement leads to the equivalent Laue, Ewald and Bragg equations. All these formulations of the diffraction condition link the wavelength and the directions of the incident and diffracted wave with the geometry of the three-dimensionally periodic pattern. 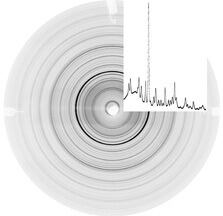 With their help, the directions (usually compressed to 1 dimension in space) of constructive interference of diffracted radiation observed in a powder diffraction image ("diffractogram") can be assigned to the crystalline phases contained in the sample by comparison with databases. This identification of the phases is called "qualitative phase analysis".

Rietveld (1967) developed a method for the refinement of crystal structures from powder diffractograms using a known structural model. Here, a complete, calculated diffractogram is adapted to a measured diffractogram using the least squares method. The diffractogram is calculated from the structures of the phases contained in the powder sample, as well as from geometric factors of the experimental setup and other instrumental parameters and sample properties. The aim of the method is the simultaneous best adaptation to all measured (usually 1D-)direction-dependent intensities. With this, already known structural models can be optimised against measured data (“structure refinement”) and the volume or mass fractions of phases contained in mixtures can be determined. The latter is known as “quantitative phase analysis”.

"Crystal structure determination" from powder data is the most challenging of the evaluation possibilities of powder diffraction data nowadays. As has been customary for many decades from single crystal data, the "phase problem" of crystallography is solved here without a previously known structural model (with the help of as much information obtained from other investigation methods as possible) to answer the core question of crystallography: where are the atoms?